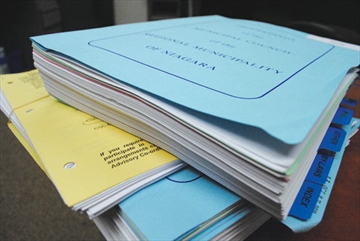 The Region plans to privatize the storage and management of its inactive documents, which is expected to save hundreds of thousands of dollars over the next several years

The privatization of document storage could save the Region hundreds of thousands of dollars in the next several years.

The Region’s integrated planning committee on Nov. 30 approved giving the job of storing thousands of boxes of documents to a Fonthill-based company, Safe Stor, rather than have regional staff do the job as is done right now.

That may well mean job losses at the Region, but exactly how many jobs could be affected isn’t publicly known: that was the subject of a separate report dealt with behind closed doors at the same committee meeting – not atypical for personnel issues.

The decision, which still needs to be ratified by the full regional council on Dec. 8, could be the first of more such steps to privatize regional services, if some councillors have their way. The Region still has to sign a contract with Safe Stor.

Niagara Falls Coun. Selina Volpatti congratulated the Region for having the gumption to privatize a service that a new regional staff report said could result in upwards of $563,000 in savings over the next five years.

“Many times the status quo is not an answer,” she said. “It’s a challenge more of us should take up.”

Safe Stor beat out five other firms vying for the Region’s contract, which involves the storage and retrieval of inactive records, including 12,000 boxes of paper records, shredding services, and the storage of microfilm, VHS tapes, historical photographs and various plans and maps in storage cabinets.

The decision requires the signing of a contract between the Region and Safe Stor within 60 days. The contract wouldn’t actually start until six months from then at the earliest, so the Region can terminate its current lease.

At present, the Region has some of its staff handling the storage of inactive records in space leased from Gorge Holdings on Collier Road in Thorold.

Safe Stor’s successful bid comes more than 15 months after company president John Ravenda seemed to rattle some regional politicians by saying a previous call for bids was flawed. He said the records management industry is based on cubic feet because documents are stored vertically, not square feet as mandated in the earlier regional report. Because his $3-million facility didn’t have the square footage outlined in that report, Ravenda’s company was rejected by regional staff the first time around. Originally, regional staff had recommended Gorge Holdings get the contract to store the documents.

Ravenda also said at the time that his “state-of-the-art” facility has climate control and a dry sprinkler fire suppression system – something he said should have been included in the call for bids.

The new report written by regional clerk Kevin Bain and other regional staff acknowledged the earlier report contained errors. “Staff have taken the necessary actions to address the innocent misinterpretation of information inadvertently made in the analysis” of what was a complex bid invitation process, they said.

It costs the Region about $197,000 a year for the records storage right now, about $98,000 of that eaten up in wages, benefits and pension costs for staff, the new report said.

Under Safe Store’s bid, that cost would be chopped to about $87,000 – including some internal costs that will remain – in the first year of the contract.

Exactly how much will be saved by privatizing the work over the life of the contract – five years, with an option for the Region to renew it for another five years – is difficult to say, the report said. That’s because it will depend on the volume of records stored, and how frequently documents have to be retrieved.

Ravenda, who said he worked with Welland Coun. George Marshall for several years on the idea of privatizing documents storage, told This Week that taxpayers could save $1 million to $2 million if the contract was renewed to the 10-year mark. He noted his company, the only Niagara firm bidding for the contract, beat out other multinational firms – including Iron Mountain, which is in more than 100 countries.

“We trumped all of the bids,” he said. “All we wanted was to offer a fair price on a level playing field.”

At the Nov. 30 meeting, Patrick Robson, commissioner of integrated planning for the Region, said giving the work to Safe Stor will maintain or improve records storage, while benefitting property taxpayers.

During last year’s debate on the issue, Grimsby Coun. Debbie Zimmerman said the Region owes it to taxpayers to explore the possibility of privatizing some things to save tax dollars.

“We’d be doing ourselves and our community a disservice by not looking at alternatives,” she said.

Dear Safe Stor Staff I wanted to take this opportunity to thank you for providing our company with a fantastic solution to our file storage problems. When we first decided to have our documents stored off site, we were not sure what to expect, but dealing with Safe Stor made it simple for us...

As an associate owner of a Shoppers Drug Mart, it is important to cut unnecessary costs in order to prosper in today's economy. One way of doing so, was by finding the best price and service for my file storage needs. I have found that Safestor was able to exceed my expectations for this service. Anna and her team made the transition from my current facility to their new, state-of-the-art, secure facility seamless and hassle-free. The price point for all the services that Safestor provides are definitely the most competitive in the market as well. Thank you.

Before transferring our files to Safestor, our staff had to navigate stacked boxes in our storage unit (which was hot in Summer and freezing cold in Winter months) and was a very time consuming task...

Dear Anna, I would like to tell you how pleased we are with the service you provided for monitoring and storing my records. I retired approximately 8 months ago and have been quite pleased with the way that you have managed my files...

I am writing this letter to recommend the service of Safe Stor Records Management to you. During the past 8 years our firm has been working with Safe Stor to securely store our files, and shred old files when they were no longer needed...